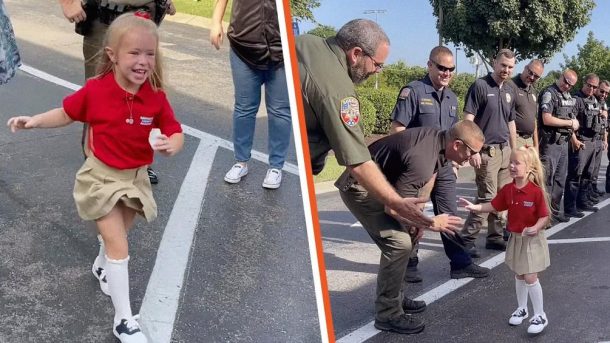 When a 20-year veteran lost his life in the line of duty, many cops whose lives he had touched in some way or another came out to escort his daughter on her first day of kindergarten to honor him. It did not matter that the veteran had passed months before.

August 8, 2022, may have been an ordinary day for many people on planet earth; however, for Anna Stolinsky, it was a milestone. It was the very first day she would kick off her education by joining her kindergarten class.

Every parent hopes to be there to see such milestones, but Anna’s father, Police Lt. Kevin Stolinsky, could not make it this time. The proud father passed away in November 2021 after a medical emergency while he was at work.

THE LIFE OF KEVIN STOLINSKY

Kevin Stolinsky was a veteran with more than two decades of experience in La Vergne. He had created memories, connections, bonds, and a family of his own in those years. So when he passed on, those lives he had touched while he was alive felt the loss.

He was an excellent man to most, but nobody will miss him more than his daughter Anna and her mother, Casey Stolinsky. After his death, his friends and family gathered together and gave him a big sendoff at his funeral. 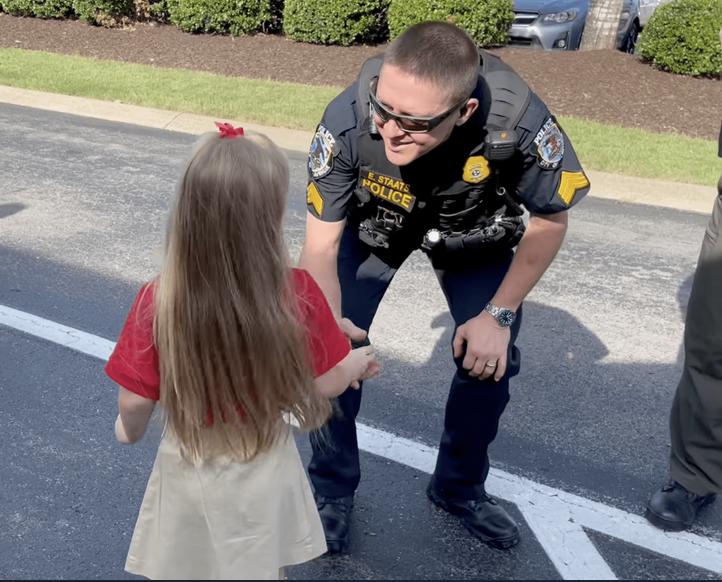 AN ESCORT FIT FOR A QUEEN

Stolinsky passed several months ago, but his memories linger in the minds of everyone he left behind. That’s why those he had worked so closely with who were aware of how much he had loved his kid decided to put in an appearance on her first day of kindergarten.

It was a thoughtful decision that melted many hearts and left little Anna feeling bittersweet. The police officers escorted Anna all the way to her school, and after they arrived on the scene, the cops, all from multiple departments, surrounded Anna on both sides as she walked to the front door of the building. 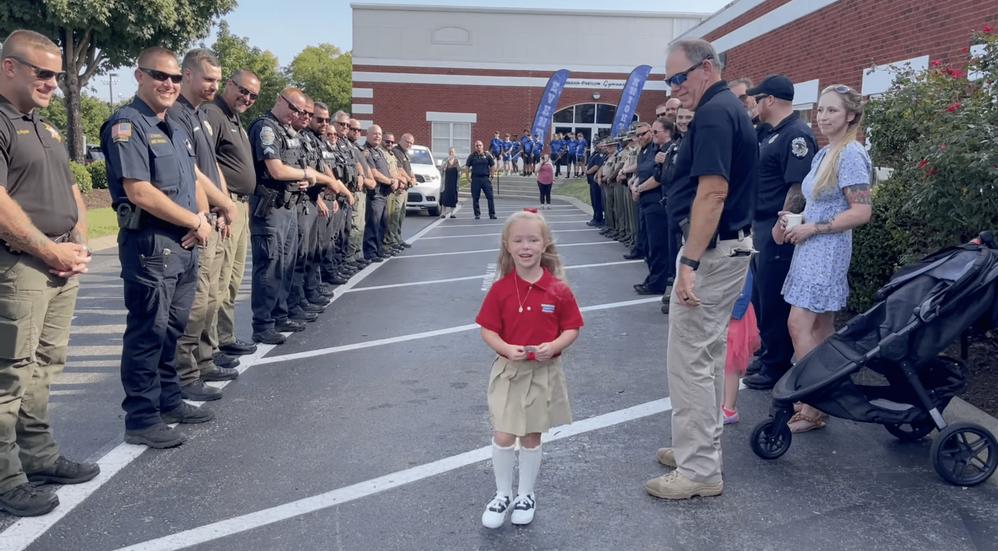 Cops lining both sides of a parking lot with Anna walking in the middle. | Source: Facebook.com/La Vergne Police Department

A video that captured the whole thing was shared via Facebook afterward and melted many hearts. It began with a view of cops in uniforms lining both sides of a parking lot. A walkway was created in the middle for the day’s VIP, Anna, and the footage showed her walking toward the camera.

The little girl was dressed for school in a red top, a beige skirt, a pair of long white socks, and sneakers. Her grandma and mom were at the scene, and they later watched little Anna give all the cops a high five as she walked down the line. 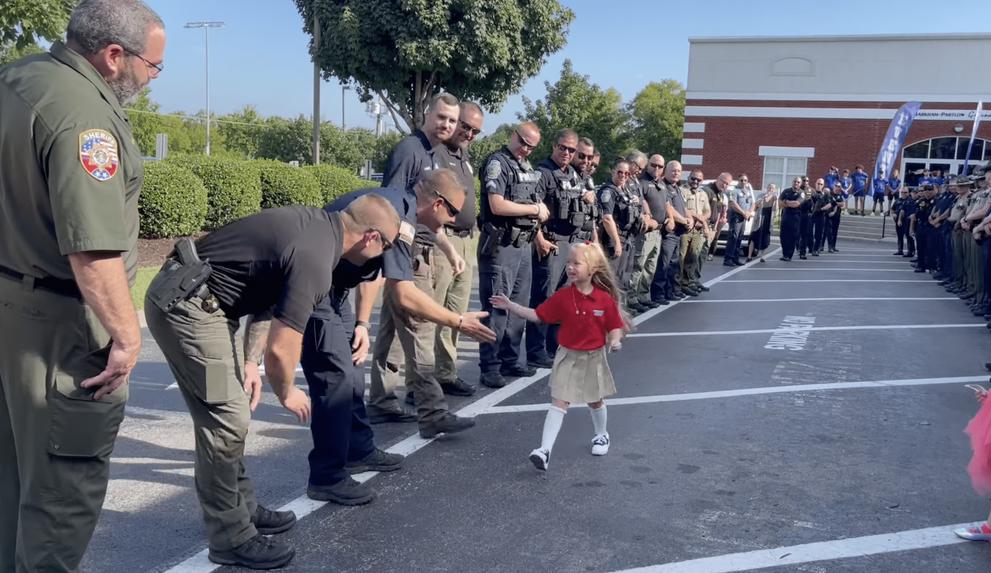 Anna Stolinsky giving the cops a high five as she walked down the line. | Source: Facebook.com/La Vergne Police Department

There were a lot of hugs exchanged as well, and the positive atmosphere reflected on Anna’s face as she soaked in all the attention and love. It was a beautiful sendoff, and Anna’s mother, Casey Stolinsky, was very grateful. She said:

“It was a very, very special day. All those officers who came out to support the memory of my husband.”

The gesture was undoubtedly a very thoughtful one; nonetheless, it left Anna with a bittersweet feeling. According to her, it made her teary-eyed from sadness because it reminded her of her late father and the fact that she would never be able to see him again. 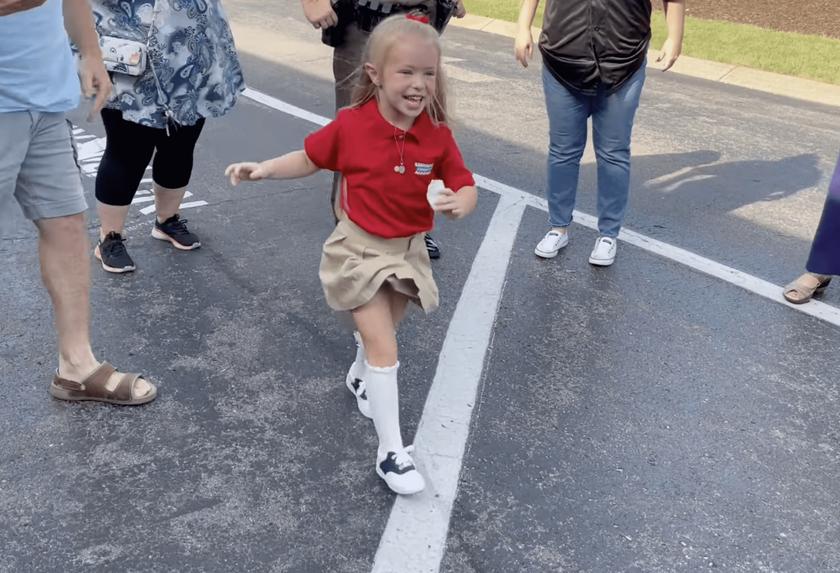 What the officers did for Anna that day did not go unnoticed by the virtual world. After the La Vergne Police Department shared the video, it garnered more than 100,000 views and over 1.4k likes.

In the comment section, Facebook users thanked the cops for doing what they did even though the occasion came up months after her father’s demise. Most of the comments looked like this:

“This is so wonderful. Thank you each and everyone for making her day so special.”

“I must have something in my eyes. RIP Stolinsky, we remember you.”

“From this survivor, thank you from the bottom of my heart; I was crying; you made that little one’s day. So precious…”

The good cop may have passed away, but the work of his hands and the hearts he touched will carry on his legacy. RIP Stolinsky.