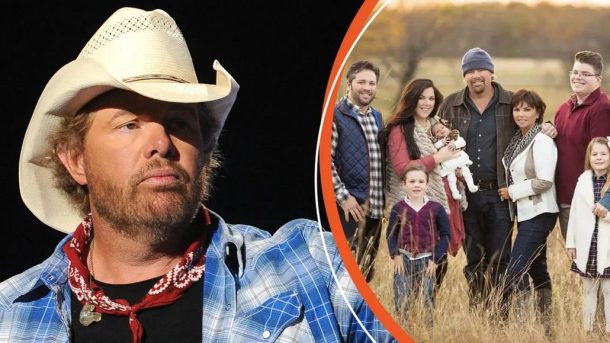 Toby Keith was recovering from cancer in 2022, with his wife, their children, and close family members right by his side. Fans shared their prayers for the star’s complete recovery, but some were using Toby’s heartache for their financial benefit.

On June 12, 2022, Toby Keith took to his Instagram page to share the heartbreaking news about his cancer diagnosis. The iconic singer revealed that the stomach cancer diagnosis was made the previous fall.

He explained how he’d spent the last six months going through radiation, chemotherapy, and surgery. The positive news was that his body was taking the treatment well so far, allowing Toby to take time away.

He said he would relax, breathe, and recover from his treatment. The country musician shared how he looked forward to spending quality time with his family before noting that he couldn’t wait to see his fans “sooner than later.”

The family Toby was referring to was his wife, Tricia Covel, who had been with him for 38 years in 2022, their three children, and some grandchildren. At the time of the “Red Solo Cup” singer’s announcement, he was on tour for the release of his latest album, “Peso In My Pocket..”

In a previous interview, Toby revealed that he graduated in 1979 from Moore High School. He then followed in his father’s career path working as an oil-field worker and doing something more creative during his off time. 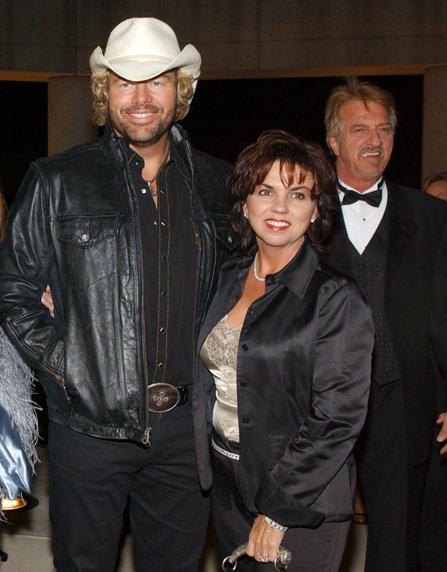 The future star and Easy Money, his band, would play at local bars. At age 20, he was at a club when he met a 19-year-old oil-company secretary named Tricia Lucus, who described him as “one of those larger-than-life guys” filled with confidence.

The pair dated for three years, and in 1984, they married. With oil fields failing, Toby was forced to concentrate more on his music, and his band started playing full-time at regional events while they raised a family and juggled their creditors, with Tricia recalling:

Toby once shared that dozens of people had told his wife that she needed to ask him to get “a real job” as he was chasing stardom. He described his wife as a loving and strong-hearted woman for staying by his side despite the circumstances.

The singer noted how great it would be great for both of them if he struck gold! When the legendary star met and fell in love with his wife, she was already a mother to her daughter, Shelley, and Toby adopted her when he married Tricia.

In 1985, the musician and his wife welcomed a daughter, Krystal Keith, who decided to follow in her father’s footsteps by becoming a country music star. The singer’s last child was Stelen, who was born in 1997.

His Instagram page said he was an investor who worked in venture management. After Toby’s father, H.K. Covel, died, the country star confessed that his focus had shifted more to his family.

He confessed how hard it was for him to leave his children since his father’s death. Toby shared how his retired oil-company executive father had a funeral that was “fit for a king,” and he hadn’t cried as he focused on taking over looking after his family.

In 2010, the musician opened up about his Dream Walkin’ Farms home outside of Norman, Oklahoma. He revealed that it was where he raised thoroughbred racehorses and hosted game nights.

The 160-acre ranch, safe away from Hollywood and the spotlight, was where he enjoyed being with his family. They played racquetball and basketball, fished, and battled it out in Uno and Risk.

It was revealed that Toby [Keith] would never personally contact anyone to request funds, and accounts that did that should be reported.

Toby and his wife had taken twelve years to make the rolling plains of Oklahoma their dream home. The singer said nothing was on the land before he and Tricia arrived to change it into what they wanted.

The estate boasted an 8,900-square-foot house with a kitchen, theatre room, and a 2,500-square-foot cabana where people could relax, swim, or grill. Toby’s home also has a lake where he and his family fish for perch, bass, and catfish.

The property also has an eight-car, two-story, 6,000-square-foot garage. The ranch was where Toby spent time bonding with his family as he recovered from his treatment.

KEITH FANS ARE PRAYING FOR HIS RECOVERY WHILE OTHERS TAKE ADVANTAGE

On August 8, 2022, Toby took some time to appreciate the support and prayers he’d been getting from his fans. The star shared a video of some of the posts and thanked them for their “love and support.”

In June 2022, the country musician described his fans as the “best” ones worldwide because of their support. One fan replied to the post noting how “honorable” Toby was for doing the work of the angels for vets, warriors, and children with cancer and their families, stating:

“Who else in country music has ever done so much with their life other than Toby Keith? For him, we pray no limitations, only possibilities.”

Someone else shared how Toby’s fans had been with him through the lows and highs of his life. The fan noted how no one fought alone regarding their support before sharing how the star was in their thoughts and prayers and wished him time to heal.

Sadly, not everyone was in it for Toby’s sake, as some tried to take advantage of the singer’s suffering. In June 2022, the star shared a warning to his real fans, telling them to beware of “imposter profiles” that claimed to be his.

He said he and his team had been made aware of accounts posting “falsified updates” about Toby’s health. The post noted how the team was working on having the false accounts removed.

The star’s Instagram account stated that all updates would come from verified sources. It was revealed that Toby would never personally contact anyone to request funds, and accounts that did that should be reported.