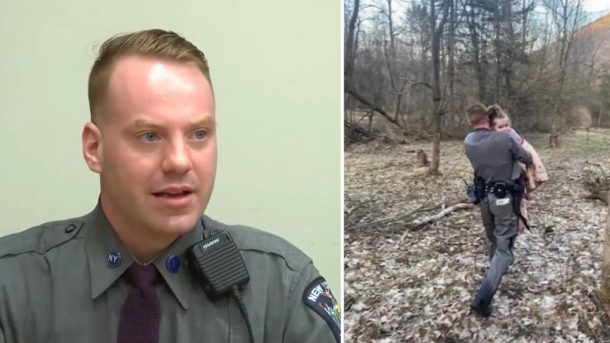 State Trooper Brian recalls reaching the top of the mountain and feeling winded. He was surrounded by the green and brown of the trees when he suddenly spotted a pink dot in the distance.

When a two-year-old girl went missing in South Bristol, New York, officers knew that they were under a huge amount of time pressure to find her.

Missing children during the day is one thing- but when night comes and the temperature drops, it becomes even more dangerous.

A New York State Trooper named Brian Hotchkiss was the man in charge of the search party- and he was well aware of how serious the situation was.

“These missing kids, it can go really bad. It’s time-sensitive depending on the time of year, so although it was a nice day the temperature was dropping,” Brian said.

He and the search party spent some time knocking on doors through the neighborhood, but no one seemed to know the whereabouts of the little girl.

As night fell, Brian made the decision to begin climbing the mountain that was half an hour from the girl’s home.

It took half an hour to reach the top of the mountain, by which time Brian was ‘winded’. All he could see at first was the green and brown of the trees.

But then, he spotted a pink dot in the distance.

The speck of pink was stationary on a rock next to the stream. Brian’s heart dropped as he began to run over. He hoped that the child was alive.

“I followed the stream and I located the child, she was lying on her stomach on a rock, and I ran over as quick as possible and I saw her arm move and I knew she was alive and my heart just dropped. I was so excited, I ran up and she hugged me immediately, she wouldn’t let go,” he said.