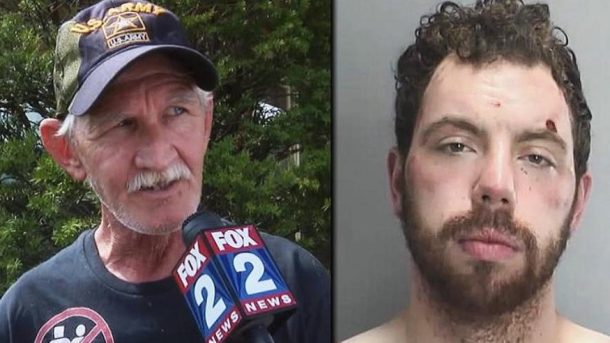 A man allegedly followed a teen girl from her school bus stop and into her house. Little did he know, though, her Army veteran dad was home — and he was prepared to take care of business.

Mike Oliver, an Army veteran and a father of 15, was none too pleased when he found a man in his Livonia, Michigan, home on a Monday afternoon. The guy had allegedly followed his teenage daughter from her school bus stop and into their house, according to Fox 2 Detroit. “The door’s staying open. Then, I heard her talking,” Oliver recalled. “I get up, I go to the door, and there’s a guy in my door.”

After getting off the bus, Oliver’s daughter had noticed something wasn’t right. She quickly realized someone was watching her, and they had continued to follow her as she walked home. When she reached her front door, she was approached by a man. According to police, he allegedly followed her onto the porch, asking if her parents were home as he followed her into the house, WXYZ reported.

Luckily, Mike Oliver had been sitting in the living room, waiting for his 15-year-old, 10th-grade daughter to get home from Franklin High School when he discovered the man, who appeared to be about 30 according to the dad, had followed his daughter home. Upon this realization, Oliver asked the man in no uncertain terms what he was doing on his property.

Rather than answer, the suspect decided to try to bolt from the residence. However, Oliver wasn’t going to let him get away so easily. The Army veteran promptly went after the man, later identified by police as 27-year-old David Roberts of Livonia. Roberts didn’t get very far.

In fact, Oliver stopped him before he even made it off his lawn as he wrestled with him in the front yard. “Grabbed him by his hair,” Oliver said, recalling the moment he stopped the man dead in his tracks. “He was like an alligator just twisting, and he got away. He ran around the corner.”

Although the suspect initially escaped his clutches, the protective dad wasn’t a bit discouraged. Mike Oliver got into his truck and followed David Roberts through the neighborhood. Oliver’s 19-year-old son and the neighbors also got involved, attempting to help track Roberts down as Oliver called 911 while in pursuit of the suspect.