The Tonight Show with Johnny Carson would sometimes have surprises. Sometimes there’d be a revealing story told in an interview. Sometimes it would be as wild as Kermit the Frog guest hosting. 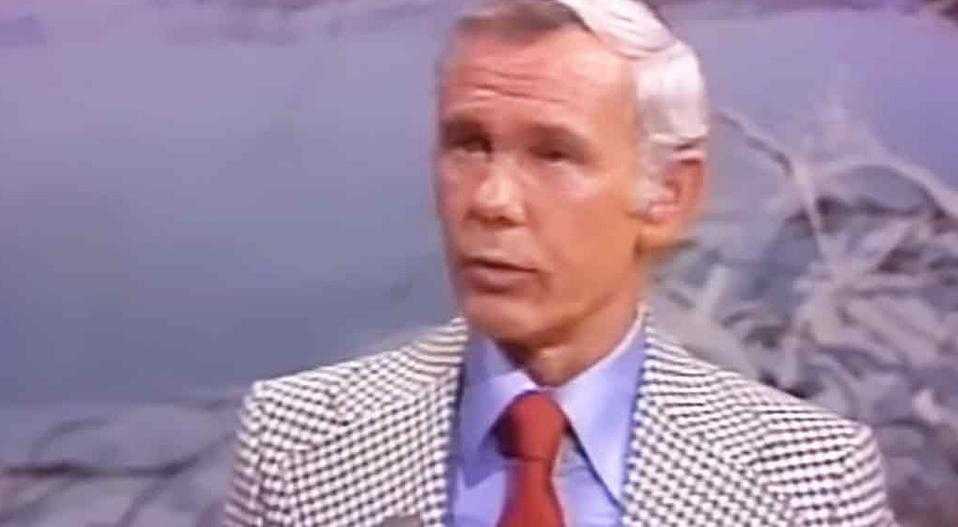 In this episode from 1976, John Wayne makes a surprise appearance. John strolls out from behind the curtain as Johnny talks about who will be on the show that night.

Ed gives an ‘uh oh,’ and the audience applauds as Wayne enters the stage. He’s wearing a tuxedo and has a mustache. Wayne pretends to have walked onto the wrong set.

After Johnny’s hand, Wayne takes a seat, and they start an impromptu interview. Johnny remarks that he heard Wayne was in the building. Wayne responds he was present for a Dean Martin roast.

Wayne brings up the Wall Street Journal article about Carson. Carson thanks him for the compliment. The two celebrities have a brief discussion about positive and negative press.

Wayne, stumbling for words, lets Carson speak. Carson asks what Wayne is up to, and the Western star states proudly that he’s going to Carson City. Carson finds some humor in the relation, and Carson notes he’s never seen any relation to people there.

Carson then talks about Wayne giving up smoking. Wayne talks about how he wishes he could still smoke but that he can’t.

Trying to be friendly, Ed, sitting next to Wayne, offers him coffee. Wayne says he can still drink a bit of coffee. After taking a sip, Wayne states with a smile, ‘This is the kind of coffee I like.’

Carson then talks about the Swing Out Sweet Land 90-minute special that Wayne will appear at. Wayne talks about the show and how his good friends initially put it on. Carson remembers it as well, speaking about Jack Benny.

Carson asks if Wayne has any upcoming projects. Wayne says his latest film will be called ‘The Shootist.’ In that film, Wayne plays a gunfighter, though Wayne mentions gunfighters in the wild west were called shootists.

Carson then brings up how some Western heroes had troubled pasts. Wayne admits to this but that sometimes you must fight fire with fire.

Carson speaks about how some men would kill each other from behind. Wayne admits he might’ve done that if he was scared of the guy he was fighting.

As the interview closes, Carson thanks Wayne for coming on the show. Wayne also congratulates Carson on that fantastic article once more. Wayne leaves the stage as the band plays him off the show.

‘The Shootist’ would be John Wayne’s last film role in 1976. He would die in 1979, leaving behind a legacy of many Western movies.