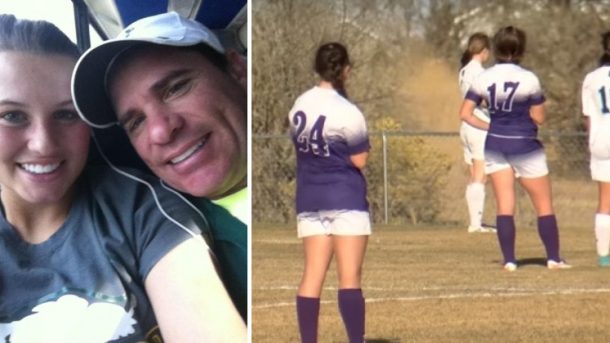 Parents at a high school soccer game were initially confused when every player on the field stopped playing and turned towards the left side of the field. At first, they weren’t sure what was going on — then they heard an unmistakable sound and saw what all the teens were looking at.

The Siebel Soccer Park in Great Falls, Montana, is where the Great Falls High and CM Russell teams play the majority of their home games. The park has inspired a tradition, thanks to its location. After a video emerged online of the unique practice that’s now become common at the park, it quickly garnered a lot of attention.

At 4:30 p.m. on a Tuesday afternoon, the Bison girls were hosting Butte in a Class AA playoff game when a familiar sound was heard in the distance. Immediately, in the middle of the 1-0 game, both teams froze and the head referee stopped the play clock for a minute. One spectator filmed the incident, which was so simple yet so powerful a gesture.

The sound that brought the game to a halt was the national anthem, which plays over the speaker system at Malmstrom Air Force Base (MAFB), directly across the street from the park. Every day at 4:30 p.m., the anthem plays as the United States flag is lowered from its perch overlooking the base and the city, Montana Sports reports.

Usually, the teams are only practicing when the anthem plays, and they stop to honor the flag. However, on this particular Tuesday, when the anthem played at 4:30 p.m. just as it does every day, the girls on the field were in the middle of the 1-0 game. Much to the surprise of onlookers, the head referee stopped the clock, and the girls knew what to do. Both teams turned toward the flag, and some players placed their hands over their hearts. The audience then followed suit.

The teams didn’t always interrupt their activities for the anthem, however. As CMR girls coach Willie Pyette explained, it’s a tradition that started when he took over the Rustler program and moved practice to the Siebel Soccer Park. After becoming coach of CM Russell High School girls soccer and moving the team’s activities to the park, he took notice of the daily tradition at MAFB and decided to make it part of his team’s practice.

Now, with the new location and the playing of the anthem, the Bison and Rustlers stop whatever they’re doing, which is usually just practice, face east with their hands over their hearts, stand at attention, and pay their respect to the flag. Only after the anthem is finished do activities resume.

Pyette says the tradition isn’t meant to be a political statement but rather a sign of respect to the servicemembers at Malmstrom and beyond. “I have our team stop, stand at attention and honor the anthem,” Pyette said. “Then we go back to practice. We all stand and show respect.” He added that the unique tradition will continue for as long as soccer games are played in the afternoon at Siebel Soccer Park.

The National Anthem stands for the liberties that many in this country take for granted, but it has gotten a lot of disrespect, stirring controversy over the years. Instead of standing in honor of those liberties and ideals, many have protested the anthem for the times they feel the country has fallen short of realizing them. That’s not the case everywhere, though, as the surprised spectators at this soccer game saw. Even in the middle of a game, these girls remembered what is really important: Showing respect for our anthem and our flag honors the people who fought for our freedom.

Kids, especially teens, do the darndest things sometimes, and that includes an abundance of instances in which they choose to do the right thing. Usually, those aren’t the kids making headlines, though. While kids behaving badly will always manage to get attention, there are plenty of other teens who know to do the right thing.

All too often, these youngsters fly under the radar, not drawing the praise they deserve. But, every once in a while, the spotlight shines brightly on them when they do something particularly awesome. In a world filled with news about kids doing the wrong thing, it’s nice to see a story about teens, like these girls, who do the right thing. They could certainly teach a few adults about respecting the flag and the people who keep us safe. Good job, girls!