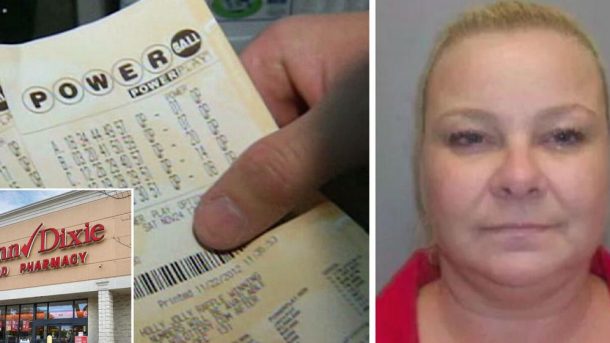 It takes a lot of luck to get your hands on a winning lottery ticket, which is why people are ecstatic when they learn that they have won. However, a cautionary tale is going viral that will have you being extra cautious when it comes time for you to cash in your winning ticket.

It turns out that there has been a growing trend of cashiers scamming customers who come in to cash their winning tickets. The cashiers will often pretend to throw away the tickets and lie to the customers by saying that they did not win, only to keep the winning ticket for themselves.

Crystelle Yvette Baton was working her normal shift as a cashier at Winn-Dixie Liquors in Fort Myers, Florida when she tried this shameful scam, but it didn’t end well for her.

When a man approached the 42 year-old’s register with the winning ticket, she scanned it and realized it was worth $600. Despite this, she told the man that it was only worth $5, quietly pulling a $5 bill out of her purse and giving it to him.

When the man left with the money, Crystelle thought she had gotten away with her plan and gleefully looked forward to cashing the winning ticket for herself.

However, she ended up learning that she messed with the wrong guy when he walked back into the store and revealed that he was actually an undercover cop. As he searched Crystelle, he found the ticket hidden inside her notebook, and it was off to jail with her!

This serves as a reminder that crime really does not pay. Find out more about this story in the video below.