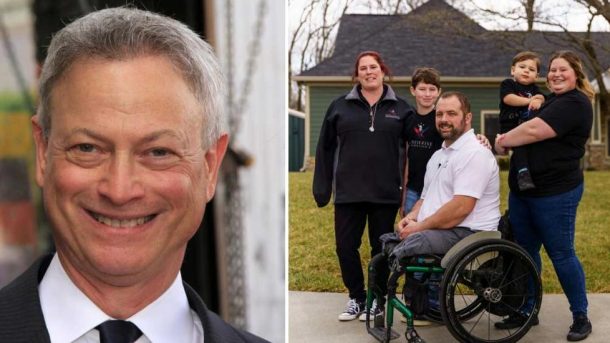 Since its inception, the Gary Sinise Foundation has provided 79 specially adapted homes to severely wounded heroes. Retired Army Sgt. Christopher Kurtz is just one of those who recently benefited from Gary Sinise’s charity.

Two years ago Kurtz applied for a four-bedroom, three-bath house. This past March he and his family received a life-changing gift: a new smart home, specifically tailored to meet Kurtz’s needs.

Kurtz enlisted in the Army in 2009, and by June 2010 he was deployed to Arghandab River Valley region of Afghanistan.

In December of the same year, he was on foot patrol when a remote IED denoted near him. It sent him approximately 60 feet in the air.

As a result of the ex-plosion he lost two fingers, broke his pelvis in several places, and needed both legs amputated above his knees.

He medically retired from the Army in 2013.

Returning home as a wounded warrior presented a lot of challenges, one of them being the physical limits he now had. And those were especially apparent in his family’s home.

Through the Gary Sinise Foundation he was able to receive a life-changing smart house.

And to make it even more special, Kurtz received the keys on the day of his 10th wedding anniversary.

“I am incredibly grateful to the Gary Sinise Foundation, not only for what they do for the military community, but for changing my life with this new home that will help restore my independence and make life easier for our family,” he said.

Kurtz, who uses a wheelchair, no longer has to worry about being unable to reach high shelves or figure out how to skillfully maneuver in a tight bathroom.

Everything was taken into consideration when the Kurtzes’ new home was built.

“When Gary wanted us to execute providing these homes to veterans, he wanted us to make them customizable and tailorable for them and their families.”

Gary Sinise and his foundation have helped so many of our heroes. Thank you to the Gary Sinise Foundation for building this Army vet a home he and his family can live in.